The stm32f103 is a cheap (~2$) microcontroller (MCU) from STMicroelectronics, that sports a Cortex-M3 ARM cpu with 64kb of flash and 20kb of sram. At first look, this looks like a regular MCU like all the others. But it being, cheap (at some point the development boards with the chip on them cost less than 1$), meant that it became one of the most ubiquitous MCUs out there and even more widespread than the Arduino. This is why there is a huge amount of software written for them, and even without any programming knowledge, they have enormous utility. This is why I have more than 5 of them. They are also used in a huge variety of products, meaning that these products can be recreated, just from a single developer board. The good thing that comes from the use of the ARM architecture is that it comes with a good and clear set of standards for debugging. But all of the original debuggers cost a lot (or at least that looked a lot to me), this is why a plethora of Chinese imitations exist. A was curious about how that was done until I decided to make one myself.

While struggling to find a good use for the blackpill boards I have, I found out that they can be used as debug probes over JTAG and SWD. This is why I decided on designating one of the unused boards for that task. But first I had to decide on the software I will use. My main requirement was to use it with OpenOCD. There are a few good firmware that can be flashed to enable such functionality on the blackpill. Here is a non-exhaustive list:

I have used the blackmagic probe in the past and it is very convenient, but the fact that it can only support the CPUs that it is compiled with is very restricting. It also doesn't work with OpenOCD. For that reason I also tried using Versaloon, its code hasn't been updated for almost 5 years. and it was failing to scan for devices in OpenOCD, so I declared that it has most likely bit-rotted.

I wanted a device that is supported by OpenOCD and works consistently. Having seen that cheap JLink clones exist, I searched online on how this was done and is there a way I can replicate it. So I decided to go the illegal route and make a clone myself. This means that I will use the JLink firmware dumped from a probe to create my own DIY debugger.

The first time I heard about a dump of the firmware was when I found the JLINK-OB-STM32-F103 repository. This is an image, intended for people who want to integrate a debugger on the same board as their main chip (This is why it is called OB or On Board). That piqued my interest in the topic again and I decided to flash it on one of my boards. I first flashed the firmware from 2012 and checked the output from lsusb to see this:

Seeing that it got recognized by the OS properly made me hopeful enough to try download the JLink Software. Which detected the device and to my amusement even offered to upgrade its firmware.

I didn't have very high expectations from this as I knew that the bootloader on the blackpill wouldn't manage the upgrade. But I didn't consider the fact that it might just flash something that makes the probe inoperable. Which turned out to be the case. The JLinkExe showed a probe faulty message. 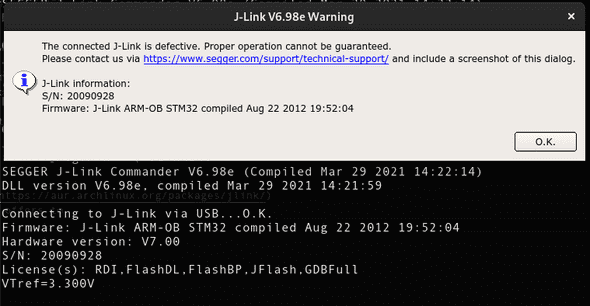 As I had downloaded the whole repository I decided to flash the version from 2019 and see what happens. It again reports itself to lsusb as a J-LinkPLUS and asked me to upgrade its firmware. The update failed again making the device inoperable in the process.

From this, I could infer that this device is still supported as the newest update for it is from 2021, but I didn't know where and how I could even obtain the firmware, maybe I could dump it while it is downloaded from the internet or something similar. For now, I decided to just refuse the update and continue without it.

Having gotten the device recognized and seeing that it works. I moved on to the next problem. That is the fact that I have no idea how to connect a different device to be debugged. This is why I started looking for a schematic of the original JLink PLUS to see how its pins are connected only to find out that it contains an FPGA inside so it is nothing like the thing I have at the moment.

The repository that contains the firmware also has a reference section where I found this: jlink-ob. It describes what is the meaning of each pin and how it's supposed to be connected. Trying to connect it like that didn't give any results. However, that didn't discourage me as it is for a different device, and I was looking for a f103 schematic.

The other links were all from blog.csdn.net. I scoured the website searching for something useful in the sea of Chinese characters I don't understand and eventually stumbled upon two promising pages. The first one looked like some kind of diary that mentions how the extract the firmware from JLinkARM.dll, and the second had what I was looking for. A schematic showing which pins are used for the JTAG communication.

What I was looking for was SWD pin but the schematic only gave the connections for the JTAG protocol. Having previously looked at the Versaloon source code and at pictures of other probes, I knew that the SWDIO and SWDCLK pins sometimes correspond to the TCK and TMS pins. This is how I connected my other blackpill board that was going to be the target of my debugging, and this is what I saw:

It was able to correctly identify the CPU and dump the CoreSight components. Later on, I found that the schematic is also available publicly from SEGGER. Proving that I wasted a couple of hours searching for it.

Upgrading to the latest version

I didn't try debugging at this point but there was no reason It wouldn't work. What I was more interested in was getting the newest version of the firmware. As found on the Chinese website the firmware for the probe doesn't come over the internet but is instead embedded in the JLinkArm.dll file. A quick check showed that there is a corresponding /opt/SEGGER/JLink/libjlinkarm.so file on Linux.

I used bless to open it and look around as it can manipulate the binary data. The first thing I searched for was OB-STM32F103, and there it was. 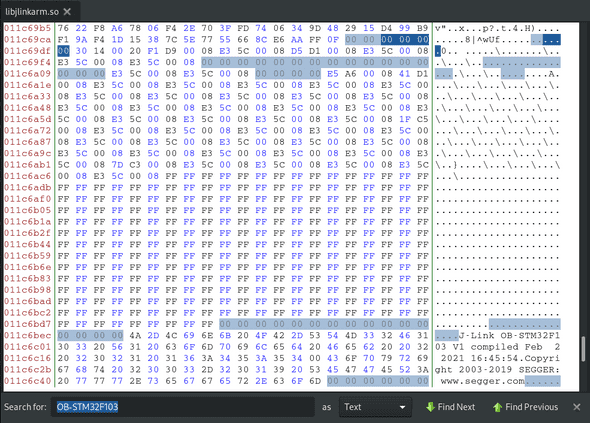 The best part is that there is no need to determine the end of the firmware, as what isn't needed won't be used. Starting from the bytes that mark the beginning, we can just take 65536 (0x10000) bytes as the size of the flash is 64kb.

I opened the downloaded .bin file, deleted the firmware contained there, by removing all of the bytes starting from XX XX 00 20 and replacing them with the ones copied from the .so file. But why is a bootloader needed in the first place? What is in the bootloader and why isn't the firmware starting from 0x8000000 like it should?

A custom bootloader is needed because the original firmware is supposed to be placed at 0x8004000. Bing impossible to put it elsewhere it needs some code to move it around. The source code for the bootloader can be found here. It is nothing fancy, just relocation of the interrupt table and jumping to the start address.

This is how and why you can buy a cheap JLink programmer from China for less than 5$ like this one. I don't believe that anybody would use this information in any malicious way but if you can, buy the real one. If you are unable to, then make one yourself don't buy the imitations.

P.S. Somebody should try this on the stm32f103 imitation: gd32f103. It would be the ultimate fake JLink adapter :D